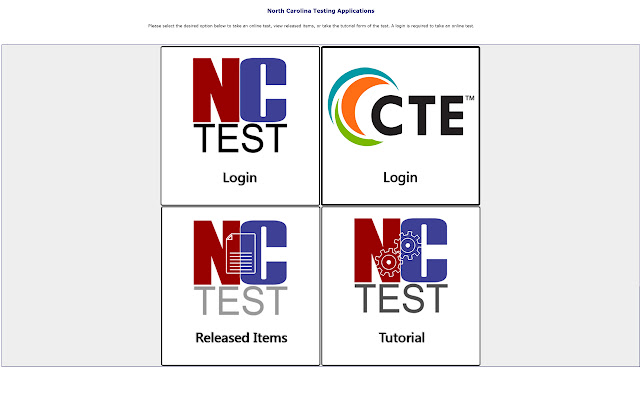 For the testing program of North Carolina Public Schools. Contact your LEA test coordinator for questions.

For the testing program of North Carolina Public Schools. Contact your LEA test coordinator for questions.

For themes they give us knockoff colors, The UI/Font of the text and the organization Itself is unfriendly, It seems like a prison.

big ol pp in my bootyhole

Thank you for reading my review, students, teachers, and maybe the developers. I rate this extension 3/5 stars, it first of all is called NCTest, and look at what it's on. It's a literal extension. If you are a school computer you cannot rate this or do a review due to a classlink merged with LanSchool and Securly. I recommend you don't visit Securly blocked sites, as the principal will be notified when you do. In my view, it has practice tests that work. It's buggy but if you don't try and do something weird, it won't bug out. You can easily escape it if it's full screened, or windowed. The students aren't usually smart enough to get out of it, but the occasional technical kid who is a gamer and smart enough for trial and error. Alt + Tab works, also the Escape key can also get you out. Kids can easily cheat with easy click back and forth. But overall in a special needs class and a full school, it works. The teachers I have collaborated with have no idea how to work LanSchool, so all they know is that there is a spyware watching them. LanSchool blocks them from deleting the extensions listed: everthing. In one of my classes I needed my kids to learn about history in the U.S. and something cool about it. Some kid chose "Cocaine Bear" and guess what, it was blocked by Securly. NCTest blocks you from deleting LanSchool and Securly. Securly blocks them from deleting NCTest, and same thing with LanSchool. It has been tested to be proven one of the most boring methods to teach, but with a little spark you can make it good. The highlighter is low quality and usually doesn't work. Overall it is a bland test extension for school. I recommend not downloading this on your personal computer at all. Needless to say, it is a bland extension with small effort used to make it better, the one thing they updated was the tests and guess what.... YOU CAN NOW CHANGE THE COLOR OF THE WHOLE THING! My kids were distracted with the color changing properties since NCTest was always so bland the second they added something moderate they went crazy. Help button doesn't work and the developers somehow made off with enough money that they don't need to respond. The organization that made this extension/test is called cuacsapps. The design is horrible, I can see that there is no inappropriate ads or ads at all, but as many people have quoted, made by a three year old. And it's true, I have no experience and was able to make one by myself. But remember this was made before most of you were even enrolled in school. Works fine with me and anyone I try it with under watch, the second I'm not watching is when the problems go all over. Overall it's fine and works well enough, the people rating it as a one star just don't like the tests on it. Let me repeat, it also lets you prepare for tests. The only things that are a bit weird is that they haven't updated it since COVID, which is understandable but this is a virtual extension that you can be on a Zoom/Google Meet talking about how to make it better. Do not add a brain break, most of the students during an iReady brain break they just leave the room to go to the bathroom. Most of these kids are from Wake County, and as a response to all the administrators there. What are you doing? These kids are stopping from doing their work to read reviews on this/make a review. There are also troll reviews that just give it a five star and turn on caps lock. Look at the reviews listed, 313 reviews. 313 posts on this from mostly students. It has 1.5 stars and in my eyes, you need to restrict them from creating a review/comment at all. Thank you for reading my response, ~MK

this is the epitome of pain, get this extension if you want to experience what its like to have down syndrome. when you install this virus you will start screaming in pain and pleasure... enjoy!

So old and outdated. At least make it look nice, and it's Impossible to setup without tutorial..

love this app best NCTest in the world. god i love this!!!

Just plain garbage. There is nothing else to describe it.

Just plain garbage. There is nothing else to describe it.

The design is similar to what a toddler smashing a keyboard in visual studio 2001. A bunch of picture boxes that clip through pointer or the other way around, and is about 0.01% as aesthetically pleasing as a scantron...cuacsapps, do you know how many people hate you right now because of this app? I do. I'm one of them.

The design is similar to what a toddler smashing a keyboard in visual studio 2001. A bunch of picture boxes that clip through pointer or the other way around, and is about 0.01% as aesthetically pleasing as a scantron...cuacsapps, do you know how many people hate you right now because of this app? I do. I'm one of them.

This is a horrible program, does North Carolina not have enough money to make it better? Pressing F10 will allow you to open google chrome which there you can copy and paste the questions onto google without it kicking you out. That has not been fixed for about 4 years now. You click on the edge of the screen you get kicked out. I could put together this simple program in about 40 minutes. They use copyrighted images on the program itself (just like the STOP and all the other icons that are taken from google) they need to fix there program. It's horrible..

Reality is often disappointing They had us in the first half, not gonna lie

it was a terrible game, i couldn't get past level 1.

i use tide pods instead of bleach. but thats just my preference

I could have made a better application with ms paint. disappointing. Why do people still use this garbage?

Im even too scared to ask if this is sarcasm or not.

I hate my life

had to to take test am mad

Despite what people say about graphics, joke reviews, etc, this is for any school that plans to use this software. This is a warning, do not use NCTest, seriously. While other reviews will tell you its poorly made and low budget (which it is...) I wont beat a dead horse any further. This program has some serious problems that I'll go through. 1. Bugs, BUGS! BUGS!!! This app is really really picky about where you click. Occasionally, you'll have to restart the test just because the buttons are broken... Question embeds rarely don't load. A lot of polish should of been put on a program that we use to take tests that affect the rest of our educational "careers". This program has neither care or polish. It may seem "secure" but on many operating systems it is easy to manipulate either the window or the menu to be able to access google chrome while taking the test. Such as the F10 bug and more... 2. Poor internal design While I can't poke under the hood of this program, it is most likely poorly optimized for any platform. Slow load times and question image artifacting can be common on older Chromebooks and plague users. 3. Arguably questionable practices NCtest is known to modify particular settings in google chrome without user knowledge. Being a power user and a privacy advocate makes it a little annoying that the test browser is poking around with my personalized settings without any confirmation other than on download, which is mandatory for schools that use it. Conclusion: Other counties and states, please don't use a variant of NCtest or a child program. It's pretty awful possibly the worst test browser I've had to use.

The layout of the Tutorial was not the good

This is how mafia works

This is how mafia works

yeah, at the very least it works on chromebooks.

You ever stepped on a lego? Yeah.

NCTest... This application is the work of Johnny. Johnny was a Windows XP programmer. When the company cuacsapps went to him they gave him an XP computer and told him he had a week. Johnny risked his marriage and his life to make this application because he wanted kids to love to learn. However, once Johnny was done the company said, "Johnny we have this 10-year who will write the questions and reading passages." Johnny said, "What about a state-certified teacher making the questions?" The company responded by saying, "Does a state-certified teacher make twenty questions about the mitochondria?" "No" said Johnny. "There's your answer." responded the company. Despite this Johnny programmed everything perfectly in Windows XP. Once he was done he said, "How is this?" Instead of responding the company booted up a Windows 10 computer and loaded the testing program. Because the testing program was made in Windows XP the file became a virus and wiped out the company and the entire government. Now the world is being run by NCTest a virus that harvests human souls for energy. However, the virus spared Johnny because he was the father. Johnny, consumed by guilt decided to instead commit suicide instead of living in this horrible world. Don't use NCTest...

I mean it works, but it doesn't work particularly well