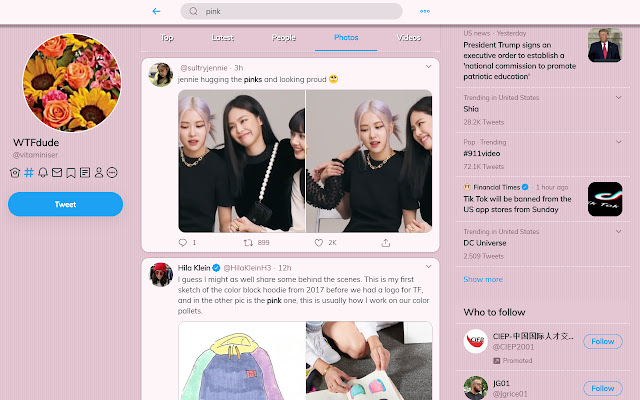 Change the look of your Twitter web app with this sleek and customizable CSS style.
Features:
🟠 Use fancy Twitter fonts to decorate your tweets;
🔴 3 color themes you can choose from (Light, Dim, and Lights out) through regular color theme picker of Twitter(Display -> Background);
🟣 Change color hue of the first two themes with a built-in color slider
and save presets;
🟠 Set and customize backgrounds with different filters;
🟢 Compact left sidebar look, with enlarged userpic and your twitter handle;
🟤 Collapse promotional tweets;
⚪️ Hide unwanted elements like suggested follows or ‘Whats happening’ box
🟡 Breaks between tweets for better readability;
🔵 Expand Images

the CSS looks amazing, but I can't use it the way I want, I can't change the colors and background (and no, I don't mean the default colors), I hope that in the future they will fix it. and I also didn't download anything that would block the editing.

Used it for over a year now, however the program is glitching out making it impossible to type out a tweet without the text box being extremely elongated.

Normally a very useful extension but for the last couple of days it's been making every text input box EXTREMELY thin, making it nearly impossible to see what you're typing

i used this for a very long time but eventually, it just stopped working and i was hit with a white screen whenever trying to access twitter and for awhile i thought it was just twitter itself until i removed the extension to experiment it pretty disappointing and i hope this gets fixed soon

The "colors and backgrounds" option doesn't work. When i would go to add a background image it wouldn't show up as the background, the "lume" and "glass" more tab were barely readable and wouldn't have any effect when i played with the sliders. I couldn't scroll down on the more tab ether, it would only let me scroll down on the twitter page itself. The only background option that worked was "coffee", but it had no settings for me to change colors diversely or change the background images. Frustrating and disappointing,,

amazing, love the expand image function and others!

So much nicer than the ugly interface that twitter themselves present us with! Thank you.

You can change color tone for the first two Twitter themes ("Light" and "Dim"). "Lights Out" theme is black-and-white only. You can change your theme in Twitter settings -> Display

lol a mi si me sirve

Can you explain what isn't working? What happens if you click on Colors & Backgrounds?