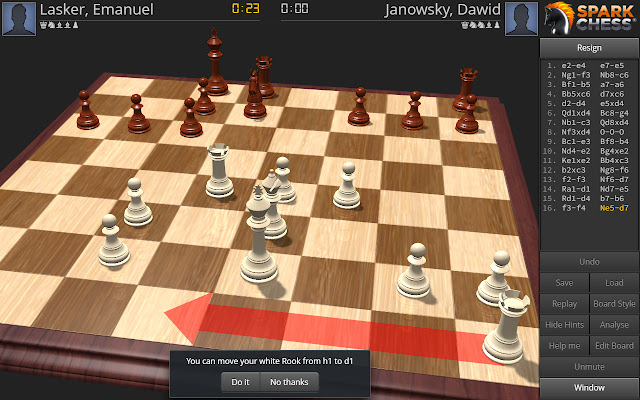 The only chess game that puts fun first. Play against the computer or challenge your friends online!

SparkChess is the only chess game that puts fun first. With a choice of boards, computer opponents and online play it delivers a first-class game of chess that’s as accessible to experts as it is to novices, kids and anyone else who wants to discover how enjoyable this ancient strategy board game really is.

SUPPORT NOTE: Please use http://www.sparkchess.com/contact.html for support – this ensures that we read and respond in due time.

NEW IN 10:
* You can now watch live online games;
* new board design;
* improved AI engine;
* 3D rotatable board (premium only)

A GAME OF CHESS THAT EVERYONE CAN ENJOY

Too many chess games are impossible for anyone but the experts and masters to win. The real test of a truly intelligent chess game isn’t how hard it is to beat, but how able it is to accommodate players of all skill levels. It’s here that the award-winning SparkChess excels.

If you’re brand new to the checkerboard, you’re looking to improve your game, you want to teach your kids to play, or you’re ready to progress to the next challenging level, everyone can find the perfect balance in SparkChess.

Complete with online play and a chat system that’s entirely child safe, you can also import and export of your SmartChess game using the standardized FEN system that allows you to recreate any board configuration to continue your game elsewhere; even using a physical chess set!

FEATURES:
* Choose from different boards: 2D, 3D and a stunning fantasy chess set.
* A simple user interface that makes games easy to set up and play.
* Choose from different computer opponents depending on your level.
* Play casual, fast or expert games to fit your needs.
* The only chess game designed to appeal to beginners and experts alike.
* Post your high scores on Facebook.
* Over 400,000 weekly users to play against.
* Learn to play, even if you’ve never seen a chessboard before.
* Large and friendly community of chess lovers from around the world.

Here is why this Sparkchess is completely stupid and really annoying. Basically you either play Cody who anyone can destroy, or you play Clair, who destroys you every time. To get someone in the middle of both extremes, you have to pay! So basically this is the most pointless game without paying unless you find it fun to destroy Cody in no time or lost EVERY time to Clair. And who wants to pay $15 to play a stupid game of chess. Not me! I can literally play as many games as I want for free with an average difficulty other places. Not to mention how HORRIBLE the adds are! So please don't waste your time on something as pointless as this. I'd recommend leaving a 1 star review too so more people will avoid frustration.

I haven't played chess in over 15 years, I am 55-years old, now. I'd lost my focus on the game through life's tests and trials. However, with SparkChess, through challenging Boris, I've somewhat regained that focus. I haven't played against anyone yet but there is this one dude who I used to defeat every time we met that sweats me everytime he sees me (says that he's gotten a whole lot better). I think I'll give him a shot, soon.

Upgrade, upgrade, upgrade! Constant reminder. I'd probably give the free version 4 stars if they wouldn't constantly remind me/us to "upgrade". I only dislike it because of that alone. The cosmetics are good, the play is smooth and pretty cool, but it's hard to give it higher than 2 stars because of the hefty price for the upgrade (you need to make an "in-between" version for $2.99 or something - hint, hint...) and there was some other stickling point but I forgot because I'm not 'addicted' to it yet. Dang - 9 bucks... yeah, I'll probably break down and go without eating for a week...

Addictive. Nice looking. Cool that it saves your state so you can get back and play your game on another computer or another day. They did add a level between Cody and Claire which is excellent since the jump in difficulty previously was very frustrating.

I really like the graphics, and how it's so easy to undo any wrong moves :] At first, I was a little skeptical, as I've tried other browser-based chess games, but this one really surprised me.

Great app! Works even if Internet is disconnected. Recommended for beginners. And it's free! ^^ Game (PNG) can be downloaded but sad thing is that it can't upload a game on the free version.

Nice look, good chess in computer mode. However, I have a few complaints for the multiplayer mode: 1. (FIXED) The list of players is sometimes updated so fast that it's impossible to invite the player you aim for. It's easy to fix that, just do not update the position of players in the list when someone above them enters a game. Or at least do it less often. UPDATE: Problem is fixed with new version, that's a great improvement. 2. I would like to be able to save a game with another player even after the game is over (full version). 3. Sometimes there appear to be connectivity issues. And when the other player resigns, it sometimes takes forever until I'm notified.

I originally thought the free portion was great, and was considering the upgrade to Full... until I went through one of my saved games and noticed that the game actually cheated. The queen moved to take one my pawns, and actually ended up taking two - one next to the target pawn as well! I replayed this move multiple times and saw the same incident occur. Disappointed and uninstalling.

Meh. Looks great but the free version has none of the good features, you have to pay for more boards & pieces.

Totally awesome. Like, amazing. Only thing to disagree with it is that the easy --> medium level change is a HUGE jump in skill. Easy is pretty much impossible to practice with due to its intelligence being just above "kinda trying". Medium is actually a competent player, but one that robs noobs like me the chance to grow.

Awesome! It could be great to have more local options instead of using only: Boris, the woman and the kid. Also it could be great that SparkChess can give us recommendations on the next moves!

One glitch had my a pawn move from d2-d4 and was taken by another pawn at e4-d3 side by side unless I am wrong that should not of happened.

Best looking free mobile chess application I know of. I have it installed on my mobile phone, my laptop and the household tablet, it has grown on me in the past 6 months. The fact that the easier level (Cody) is truly easy for beginners is very important. It means that I can introduce young players (such as my sons!) to it, shortly after teaching them the way pieces move. I am not proficient enough to judge the higher AI difficulty levels, however the jump in difficulty from Cody to Claire (beginner to medium level) is quite a big one. Maybe it can be smoothened out a bit in future releases. Allowing online playing with the free version is generous and will certainly add to the popularity of the app. Thank you. 5/5, my favourite Chrome app by far.

The program is good, but has some serious limitations. It is enjoyable to play both against the computer and online. So far the online connections have been superior to Yahoo games and there is no nonsense of having to find an open "room". I keep chat turned off. The program does not detect if there is insufficient material for checkmate; it will play on with King v. King. There are only three levels of play; variable strength levels would be great. There is a timer, but no option to play with chess timer (i.e., game in 10 minutes, 30 moves/hour, etc.). There is no help available in the program and the only help file is a FAQ on the publisher's website. There is no game analysis mode (to look for weak moves in a completed game). The options to save a completed game are limited.

Good Graphics, smooth interface. But the AI needs help. If the AI does not know that King and Bishop vs King is a technical draw there is a problem. More variety of levels would also be a huge plus.

I like that more chess programs being made. To be objective, though, SparkChess is just OK. I cringed when I saw that I had to pay for really basic "upgrades". To have an incredibly more complete version of SparkChess one can use these two programs: -Yahoo chess (better interface, Fischer time, choose color, more games, completely free-- though you have to watch a couple of banner ads) -Chess Master 10 (new @ $7.64 on Amazon, vs. $7.95 for SparkChess), which comes with a solid engine, good teaching software, and analysis software that must far outrank SparkChess's. SparkChess has the benefit of being easy to use. If you are interested enough to pay money for this program, I would instead buy Chessmaster. If you become serious about chess, I would suggest you check out Chessbase's programs, including Fritz.