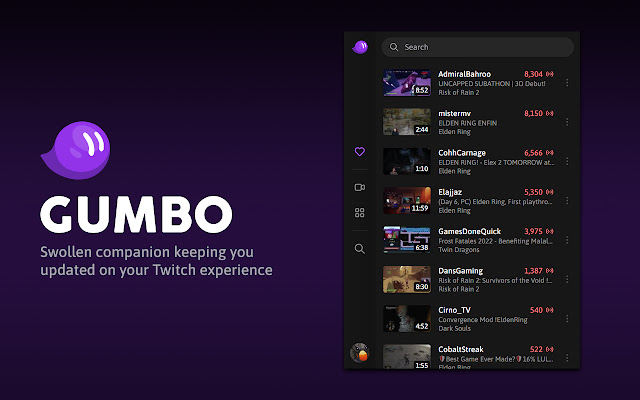 Swollen companion keeping you updated on your Twitch experience

Gumbo allows you to bring the Twitch experience outside of the main website, being notified when one of your followed channels is online, or find new ones.

replace well twitchNow; the UI is clean would be nice to pin the favorite streams in live thanks!

Excellent replacement to what we lost. It's fast, the display is good, and it has most of the additional features I would expect. I love being able to sort my followed streams by uptime and category. That's a really helpful feature. I would like to see and option for larger text (12-18pt) and larger thumbnails for live channels.

Excellent, it's working fine with a good ui like Twitch Now. Thank you !

I've only had the extension for a few minutes, but I'm preemptively giving it five stars. The UI is very sleek, and works smoothly even with my aging PC. Thank you so much for picking up where Twitch Now left off.

Great replacement for Twitch Now. I actually prefer the visuals of Gumbo vs Twitch Now. Keep up the good work dev!

Personally, I don't see the point of having a forced refresh when the extension retrieves the tracked feeds every minute. But if you need it for some reason, it could be added in a later update. On the other hand, if you want this kind of functionality, it's best to use the Support section and post it here, so I can keep track of it.

this outright does not work, at least on vivaldi. I click the login with twitch button, and a separate window flashes on screen and then immediately closes. edit: new version works perfectly. 5/5

I really hope too. Only having access to the name & box art isn't really useful to be honest.

This extension is beautiful! The design looks great and works well.

nice addon and works great with the Brave Browser.

Great alternative to Twitch Now. It works perfectly. Thank you!

Been using it because TwitchNow stopped working, it looks real great, but sometimes the number of online stream is visible, sometimes it doesnt. Seems like nobody has this problem but everytime I switch between Linux and Windows, I need to log in again.. very annoying.. It lacks a lot of features TwitchNow had.. im going to continue my search for a TwitchNow remplacement, but it's not going to be Gumbo :/

Got Gumbo to replace Twitch now and it has been working perfectly so far! Love the UI, simple dropdown list of channels that are live and that is exactly what I need!

Really nice extension and replacement for others like Twitch Now. Only feature that I would love is to sort followed channels by categories (Note: I know you can search the specific category on the search bar but I would like to see all the followed channels sorted by category lists - similar to Twitch Live extension). Not sure if that is possible atm but I would absolutely love to see that implemented in the future!

Does the extension work for you with the latest version (1.1.1)?