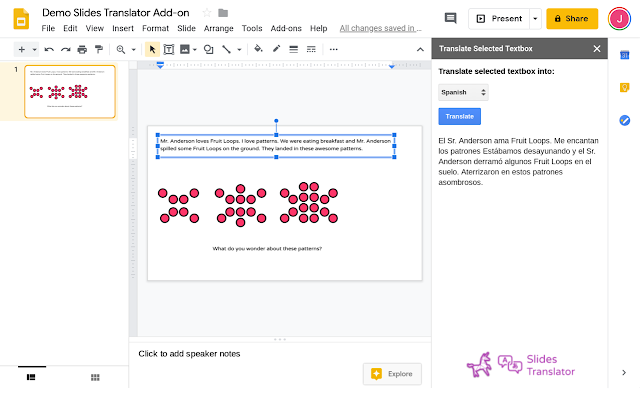 Communicate across multiple languages in your Slide Deck with ease! Slides Translator lets you select text in your Slides, automagically detects the language, and translates it to the selected languages in the Sidebar. It also includes Voice Typing in 60+ language dialects!

Easy communicate thoughts into multiple languages with the click of a button!

Slides Translator does not alter your slides in any way and translates in the Sidebar. Great for when you are presenting to an audience that speaks multiple different languages.

thank you that helped a lot

That is a good point. The intent I had when creating it was to not alter the Slides though. This way students can choose the language to translate to without leaving the Slides. It would be easier if we auto-selected and then copied the text to the clipboard so you only need to paste it.

I was hoping that by selecting the text and then translating it, it would automatically drop it into the original text box it came from. As it is, I still have to copy and paste for it to be translator. It's just the same as if I had a separate tab opened to google translate and copy and pasted from there. The extension doesn't really make my job more efficient. Maybe it could bring up the choice "replace" once it translates so it would automatically replace the text to the new translated text.

I installed it, have no add-ons menu. This doesn't appear to do anything.

Where is the Spanish translator....it is not showing up?

It helps me understand things that my teacher writes in a different language. Awesome, even though I do not want it.

I downloaded it and used it successfully. I was using the "Voice-Type sidebar" functionality. I found the speech recognition to be accurate. My suggestion for improvement is to not have the mic stop at a verbal pause, but ask users to press the mic to stop.

We can't get this to work

Its ok, but I need to copy and paste the translated text into the presentation. With Powerpoint´s enbedded translator you can do that with a click of a button

its showing an error and wouldn't open

This is a great app like if I got a slide and it was in a diffrent language!! I LOVE this app!!!!

I teach 5th grade and serve a population of bilingual English and Spanish learners. This app lets me translate entire text boxes directly in Google Slides without having to move to Google Translate in a different tab. After it translates, I just need to make stylistic choices on font and placement.

This is awesome. Great for my students with disabilities and international students!