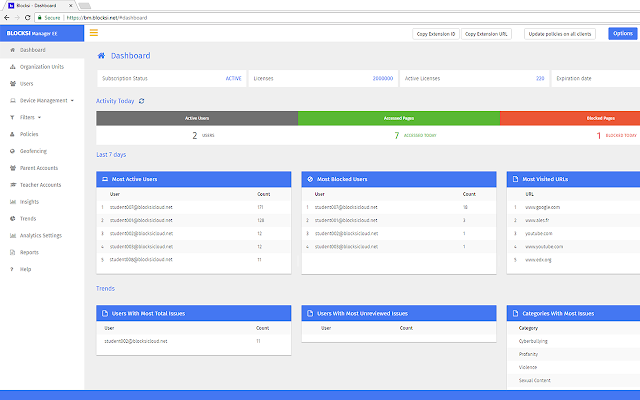 BMEE is the ultimate and most market exposed GAFE 1:1 Chromebook cloud internet filtering and trend analysis solution on the market.

BMEE is the ultimate and most market exposed GAFE 1:1 Chromebook cloud internet filtering and trend analysis solution on the market. It has been around since 2011 and is deployed worldwide across thousands of school districts. It is scalable to thousands of Chromebooks within the same school district, without putting any burden on the school district IT infrastructure. It supports filtering across more than 79 web categories and 45 million sites, Youtube filtering, content filters and time access control. Works seamlessly for both On Campus or Off Campus. Once you try it, you will adopt it and will never have to worry about it as all its intelligence is in the cloud.

this. is. freaking. terrible. hey everybody im malikai that kid who created the boing company or something like that, i just came here to let you know that... i hate this app... they block good sites and leaving the bad ones to be quote on quote educated blame covid 19! im kinda gonna make a video about it later when i get my ipad it's going to be long i hope but, not too long. this ''app'' shows that parental controls exists. frick this app. what if, when your done school, you begin to do a break like watching tv nope. your parents locked the door so you only have to watch youtube in your computer and guess what? b a m ! you get hit with ''this site is blocked by blocksi when you enter a video like that.'' blocksi is a greedy, money obsessed company who pays attention to all of the bad stuff and i need your help to stop blocksi please sue them.

this is a horrible website dont want it or need it

U can't do anything, and personally, it's not cool to have a website look at your screen 24/7 shut this stupid idiotic thing down, please.

Everything is blocked, even a harmless roblox video

Delete it, shut it down, i dont care i just dont want to see the stupid screen again

Blocks too much stuff, even blocks things that could be useful in schoolwork. If I could give this 0 stars i would. It blocks websites such as Reddit, Discord, and YouTube, which can be used badly, but can also be used for good purposes. Teachers: don't force this on students. Others: Just don't download it.

This is absolutely terrible and I can't even get on my school work without getting stuff blocked..!!

I do not like blocksi because although it hasn't blocked any sites, it bothers me that the school can see what I am doing at my house.

1 star because it blocks many things actually useful for learning. also most of the 5 star reviews here (or all, i only read the first 50) are all on the same date, which makes me think that it is laternate accounts of the same person doing htis, possibly hired by blocksi.

This review section is very unhelpful, filled with a mix of disgruntled kids trolling and empty praise. So here's a detailed review from a mature student whose school has used BMEE for years: It is very unreliable. It's good at blocking a specific URL- it's nearly impossible to get into a site that it's targeted -but it's horrible at choosing which sites TO block. For example, a couple years ago my school, which had already been using BMEE, decided to start blocking videogames. I don't know when exactly they made this decision because I, a regular gamer, didn't even NOTICE. And I didn't for 2 reasons: 1. I'm used to random sites being blocked: I don't know the cause of this, but BMEE will (seemingly at random) add new sites to their block list. It can be anything; something as random as an author's homepage, as trustworthy as the state congress' contact info, as educational as an online physics simulation, as essential as Google Drive, and even (yes, even this happened once) the school's own website! My classmates/instructors are used to the frustration of blocksi getting in the way and thwarting approved activity 2. I could (and can) still access games just fine: If you have slightly more persistence than a 4-yr-old, getting around blocksi is laughably easy. I've seen dozens, if not hundreds of sites completely slip under its radar. And certain specific blocking options, like filtering-by-keyword or blocking Youtube videos, just don't work at all! In the above examples, I'm only talking about videogames; but I can safely hypothesize that if I were trying to access something actually dangerous or obscene, BMEE would be just as ineffective. Blocksi does come with a lot of features, meant to give teachers a lot of control. But I have almost NEVER seen a teacher use them; For example, yes, a teacher can kick a student out of a website, but why would they? They're in the same room as the student; confronting them directly is easier, faster, and doesn't escalate tensions the way forcefully kicking them would. Most teachers either have easier and/or more comfortable ways of doing things already, or trust their students as responsible enough to not require such harsh monitoring. Yet after several years, my school has worked with BMEE enough that it's now pretty good at it's job. But it's been a long, drawn out battle, and this beast is not fully tamed. I would advise trying for another software; this one can work, but it's more trouble than it's worth.

Blocksi is bad it blocks my learning videos

Stop this we have extensions that can be put on a kids phone so a controling family can track them but now we have something that blocks everything and lets the school acsess everything even though your not in the school anymore please for the love of god stop.

Blocksi is bad in general, I mean ever since this new extension was added. I searched up a music video that was supposed to be part of distance learning now but now that is blocked. This lockdown is bad enough but then they blocked many of the games that I wanted to do over the weekends so I 100% do not recommend this extension especially now during this lockdown. This is a waste of time and money so no matter what you expect of blocksi is wrong, its worse >:|

All students in my classroom have chromebooks and while they are awesome tools, they do pose a significant classroom management challenge. BMEE cuts down on the time I spent policing internet usage significantly.

My elective in school is concert band. We were supposed to be like a critic and review song marching band songs. But Blocks blocked the video! How is that fair? And if some inappropriate videos are unblocked! So Blocksi is blocking random sites, and should be more aware of what it blocks and unblocks! I do not recommend this extension for anybody or any school.